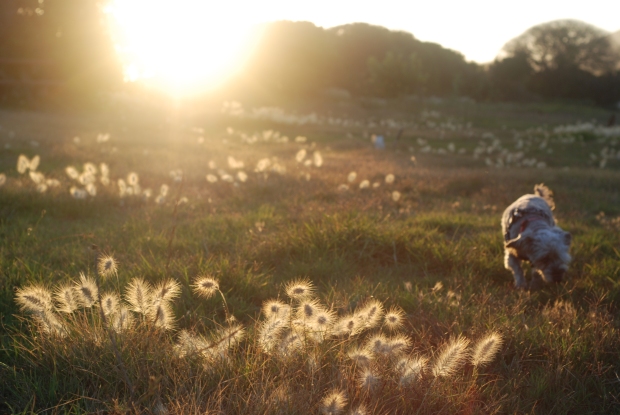 I have been remiss on my interviews. I hope you’ll understand when I tell you why.

Some of you may know, I am a huge animal lover, especially dogs. Back in April, my little Arta became ill. So much of my attention went to her. Then she passed away quite suddenly in May. It’s always sudden no matter how much you know about the inevitable. It was just devastating. At the same time, other life changing things were happening in my life. I know Arta sensed all this and decided that it was best to leave sooner than later. It was her final gift to us. The result was, I lost the passion and motivation to do anything – like the interviews for this blog. I think it’s because when you lose your love, well, somehow all the other things don’t matter anymore. I at least, wallowed in my loss of Arta. The misery became the replacement for her. As if clinging to the last spiritual remnants of her. Trying to turn it back into some tangible form, like the feeling of having her.

Now it’s over 2 months since she passed. I think I have finally accepted that she is no longer with us, however much I hate it. That’s why I want to take a moment here to give an Ode to my baby girl. It’s a way not to forget her. Isn’t that what the internet is for?  And with this tribute, I feel a melancholic cloud slowly lifting. It will never go away entirely, but I can manage it. I feel the passion coming back. And the interviews will come in the next weeks.

I want to give my heartfelt thanks to those who gave me words of kindness and sympathy whether they knew me or not. Believe it or not, I took great solace in them.

Our Dearest Dearest Beloved Arta,
We already miss you so terribly. You’ve brought so much love, joy passion, loyalty and friendship to our lives. You’ve enriched our sense of living and those whom you’ve met.
Your passing make our hearts ache. But when we remember the wonderfully blessed life we had together with you, it brings tears of joy.
Know that you’ll always be in our hearts ♥.
May your spirit soar free in your new journey. We can only hope that our paths will cross in the future so we can once again be in each other’s embrace.
Be well our baby fairy. Til we meet again.
Love forever,
E, O, & L

ARTA H.  On a rather mundane evening in November 1996, a boy came into a bar where O, his then wife, Katerina and his friend Mathias were having a drink after a day’s film shoot, in the town of Arta on the island of Majorca. The boy had a basket of puppies he wanted to find homes for. O and Katerina fell immediately in love with the runt of the litter but asked the boy for his telephone. They needed to sleep on such a big decision.

After a sleepless night, O and Katerina called the number and woke up the family of the boy at 6:00 o’clock in the morning. They dragged Mathias out of bed and together they went to pick up the little runt. That day they flew back to Munich with the tiny ball of fur in O’s coat pocket.

Upon arriving at the airport, serendipity had it that O’s production company was shooting a film next to customs. O pretended that he was part of the production and easily evaded customs and animal control.

He rushed the little puppy to the veterinarian. When he asked if there was a name, O gave her ‘Arta’ as homage to the town she was from. The vet diagnosed the poor thing as more worm than dog. He predicted that Arta would not live more than a week. Arta stayed a week at the vet. .

O and Katerina brought Arta home. Together, they tirelessly nursed her back to health. In the process, they got to know Arta and realized they rescued a Fairy and not a puppy. 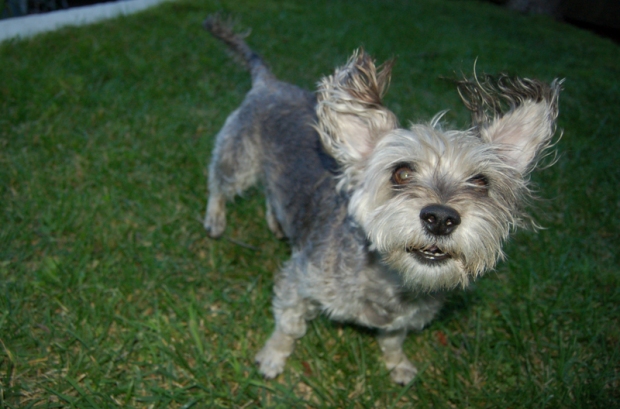 Arta grew up in Munich, Germany. She was O’s confidant and companion. She hung out in bars and restaurants and never left O’s side. She became the infamous production dog. When she was on a film set, everyone knew the producer (O) was not far behind. The sound man would affix a piece of gummi ball between her tags to make her “sound proof” as she was allowed to wonder all over the set.

In 2001, E came into O and Arta’s life. She brought her very ill dog Lulu all the way from Los Angeles to Munich. Arta kept her own but at the same time was accepting of Lulu. When Lulu died 4 months later, Arta’s shear warmth and love helped E bear an incredibly difficult grieving period.

Soon Arta won the heart of E who gave her regular trims and baths. The once wild and messy dachshund, yorkshire, schnauzer mix became the manicured sassy dog, befitting of the gay neighborhood she lived in.

In 2004, together with O and E, Arta moved to Los Angeles and started to live the life of an Angeleno. She also became a  Frequent Traveller and the darling of stewards and stewardesses.

In 2007, for fear that Arta was getting old and lonely, Ludwig came into her life to keep her spirit and health young. The new arrival was difficult to accept. A sprained leg, and bouts of depression pervaded for 6 months. A princess simply doesn’t share the stage with anyone, let alone a dog from South Central with a German name. But Ludwig’s charm eventually won her over and they soon became inseparable.

In 2008 Arta travelled and worked as a producer together with Ludwig on a film set in Regina, Saskatchewan, Canada. There she experienced -50 degrees Fahrenheit, wore snow boots, shared the director’s room, and fell in love with Canadians.

In April 2009, Arta suddenly lost her left eye to Glaucoma, a genetical disease. Although she lost her 3D sense, it didn’t stop her. She resumed playing and had a wonderful life.

In 2010 Arta experienced the RV life. She and the family travelled in a motor home for holidays. She swam in the Colorado River, skinny dipped in Sedona creeks, saw the majestic Grand Canyon. And those were just a few of the many places she tread her paws on.

In April 2011 Arta became deathly ill. There was a growth at the base of her aesophagus. Friends from far and wide came by to say their good-byes. As a swan song, the family took her to Carmel, her most beloved beach.

Arta stepped out of the car and took one whiff of the ocean air, and like a powerful potion, as if Popeye ate spinach, Arta bounced back and started chasing dogs 2 and 3 times her size.

But by Thanksgiving in 2011, Arta lost complete sight in her remaining right eye. She became totally blind. The family took her to Munich for one last trip to her puppyhood home. It was bitter sweet as she could only smell and hear the sounds of Munich. By the end of the year, she couldn’t hear anymore except for very faint sounds. And her dementia became worse and worse.

Life was extremely frustrating for Arta after that. She bumped into everything. And around two weeks before she died, she lost so much mental capacity and found herself stuck in corners of furniture and cracks, unable to pull herself out. Someone had to walk behind her constantly to pull her out of situations. She became more needy emotionally and stuck close to the family. O said it felt like she was crying for help… 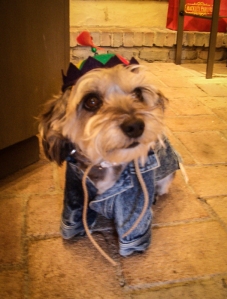 Arta travelled every where in Europe, USA and Canada. Lived the life of a fairy. She was a Citizen dog of the world.

Just as the midnight hour turned to May 8, 2013, while walking with O before bed time, Arta coughed and collapsed, passing away on Blue Heights Drive right outside her house, overlooking the night lights of the city in West Hollywood, California, USA.

We…The world lost one of nature’s most precious treasure… 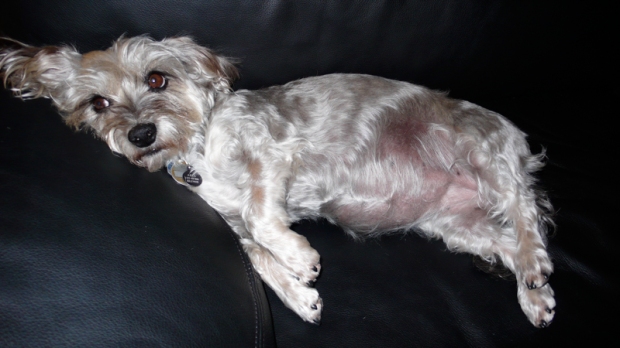 Where are my grapes? 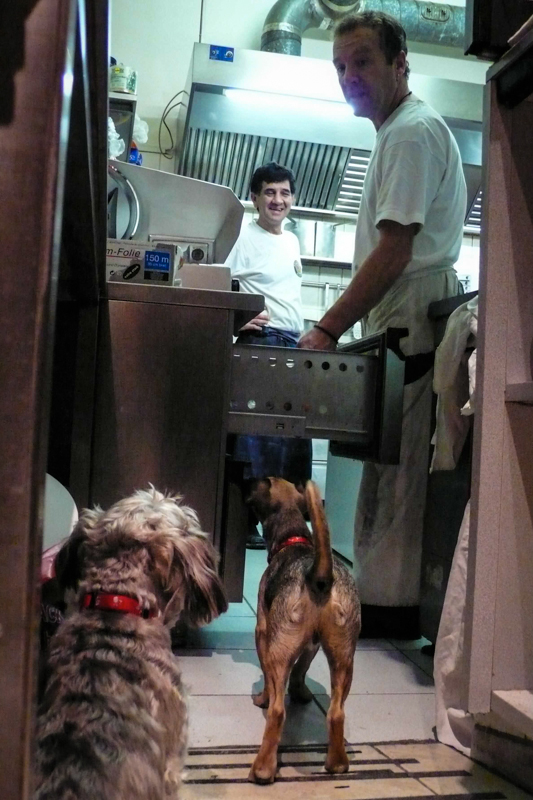 Waiting for the walk.

I have to admit, I was pretty jealous when Ludwig came into our lives. I got sick, I sprained my paw… I was miserable for 6 months. But then I fell in love with him.

It’s a tough job but someone has to do it. – Photo by David Giesbrecht

Ludwig visited me, two days after I nearly died. I had my own oxygen room.

At the doctor’s office for a check-up.

Ha! You had everyone say goodbye to me thinking I was a goner. Well, you thought wrong! Thanks to the love of family, friends and positive ions at Carmel By-The-Sea.

What are you waiting for? 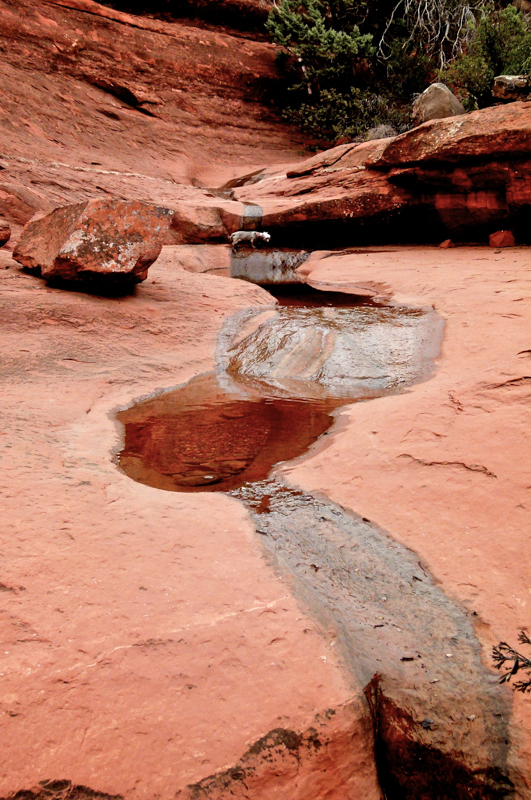 The stream looks harmless, but in reality it’s a 12 feet deep gorge filled with ice cold water. I know it first hand. Right after this picture was taken, I slipped on the slimy surface and dropped in the water like a rock. I nearly drowned in this spiritual place of Sedona, Arizona.

I love the smell of wet sand.

Munich’s Viktualienmarkt is one of my favorite places. 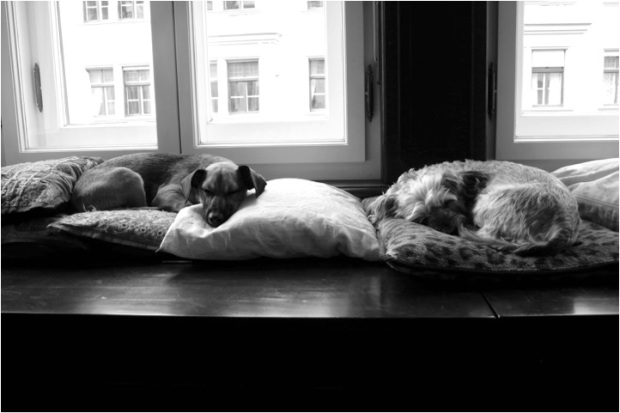 Can someone help me?

Hasta la vista, baby… I’ll be waiting for you on the other side.

Arta lies peacefully in her favorite garden at her Grandparents’ house in Orange County, USA…

If tears could build a stairway, and memories were a lane,
We would walk right up to heaven  to bring you home again.
No farewell words were spoken.
No time to say good-bye.
You were gone before we knew it,  and only the Universe knows why.
Our hearts still ache in sadness  and secret tears still flow.
What it meant to lose you,  No one will ever know.
–Anonymous

You’ll always be in our hearts dear Arta.