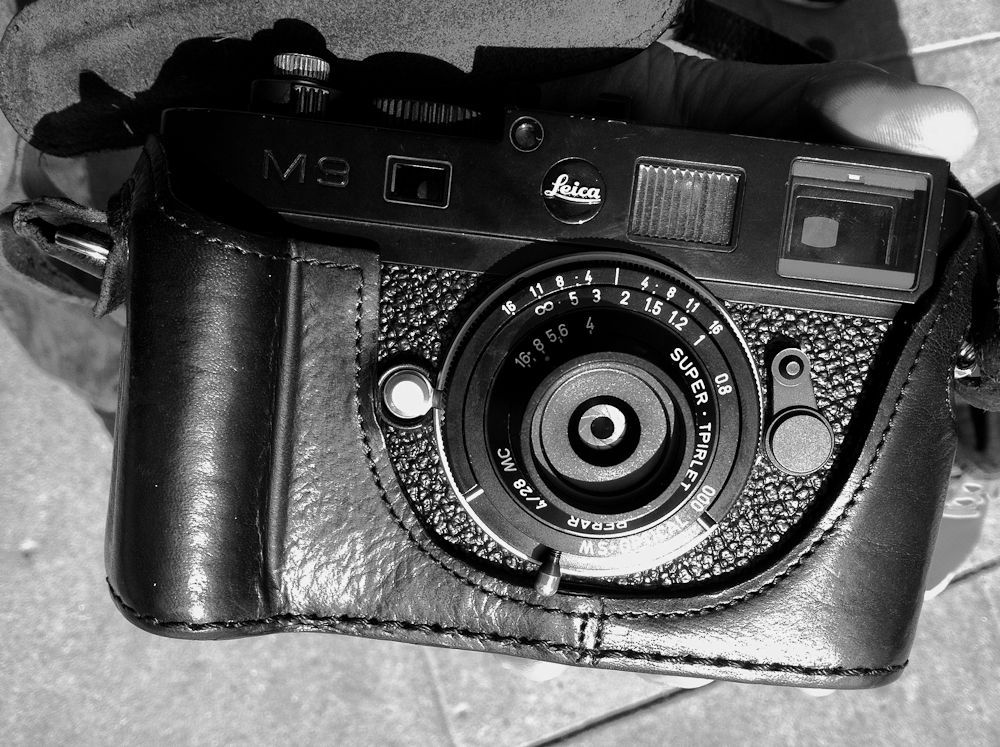 DISCLAIMER!!!: My reviews are only based on the images I take and how user friendly it is. Some images will be post processed with slight crops and pushing or pulling on the contrast or darks. That is about the only post work I do. I am not knowledgeable about equipment from any technical point of view. So if any one expects to read detailed specifications or any tech reviews, there are other sites that have the expertise. And, my bias is based on if the lens helps me capture the image I envisioned.

I had the pleasure of meeting Bellamy Hunt of Japan Camera Hunter. He was here in Los Angeles to head the Los Angeles Street Photography Workshop with Rinzi Ruiz, where I was a guest presenter and an attendee. Bellamy brought with him a few toys for us to play with. One of which is the world’s tiniest 28mm lens for the M-mount I have ever seen: the MS Optical Perar Super Triplet 28mm F4 (‘Triplet’ is spelled incorrectly on the lens I used – might make it a rarity).

I was able to shoot with it for about one hour. I used my M9 with Aperture priority at F8 and the occasional F6 or F9. My ISO was set at 400 and  I zone focussed. 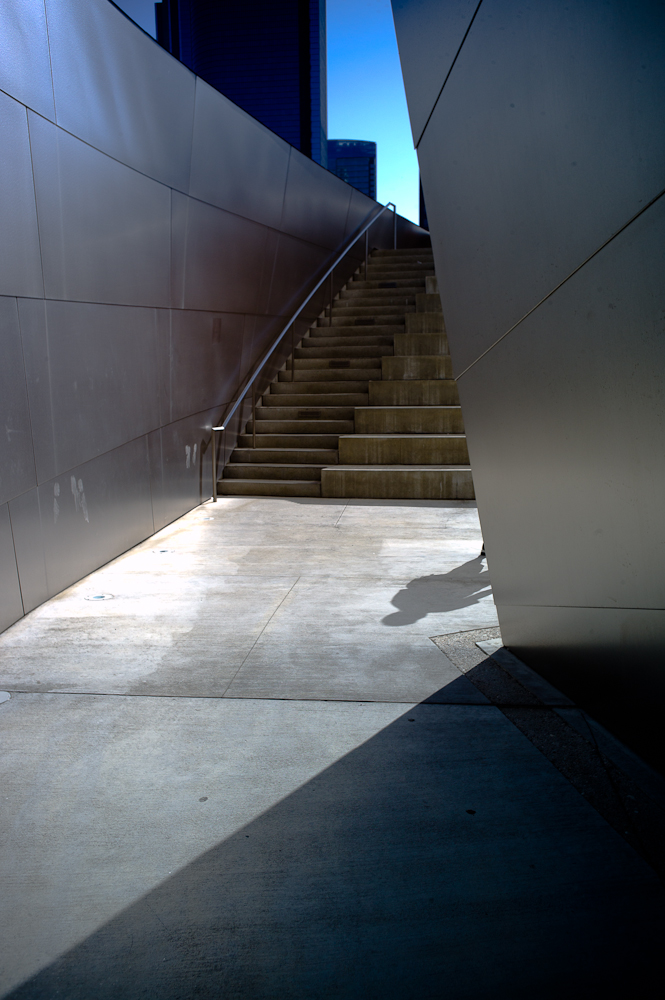 This lens is a 3 element tessar type, 28mm F4. Visually it is the most fascinating lens I have ever seen. The aperture blades are on the outside!  It is hand made by a Mr. Miyazaki in the basement of his house in Chiba, Japan. You can read about him in Japan Camera Hunter’s website here. The lens is part of the first run of 180 in the batch.

The Perar Super Triplet is meant for the photographer who loves to play with and own specialty lenses. The colors are rich and gorgeous. It tends on the blueish side. And it also shoots a tad  (like a hair) underexposed.  I think it’s around a half a stop. I like things a little contrasty myself.

The sharpness is not comparable to other 28mm lenses. In fact, if you enlarge the shot, you can see that it’s fuzzy. But the lens is tiny so you can’t compare it to a large 28mm lens. However, the details that this lens captures is amazing. It is like a little ‘superman’ – its vision is quite exquisite.

In the photo below, you’ll also notice cyan drift in the corners.  It’s something that’s easy to fix in post. But I did not do it here to show you what I’m talking about. 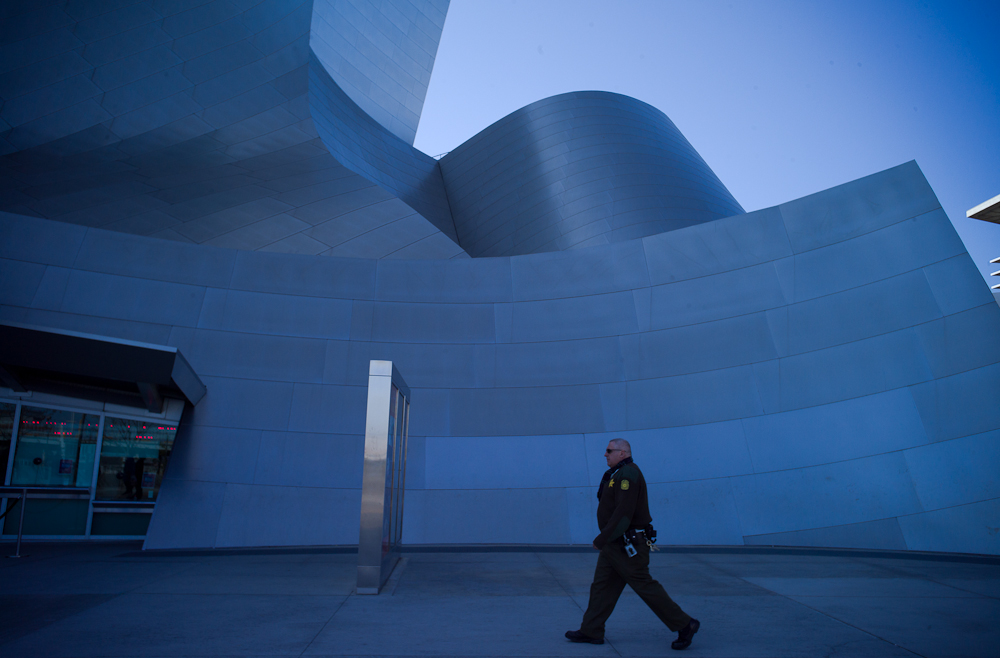 Below, I corrected the cyan drift in Light Room 3 using the Lens Vignetting correction slider. I had to push it to + 100% to get it all out. 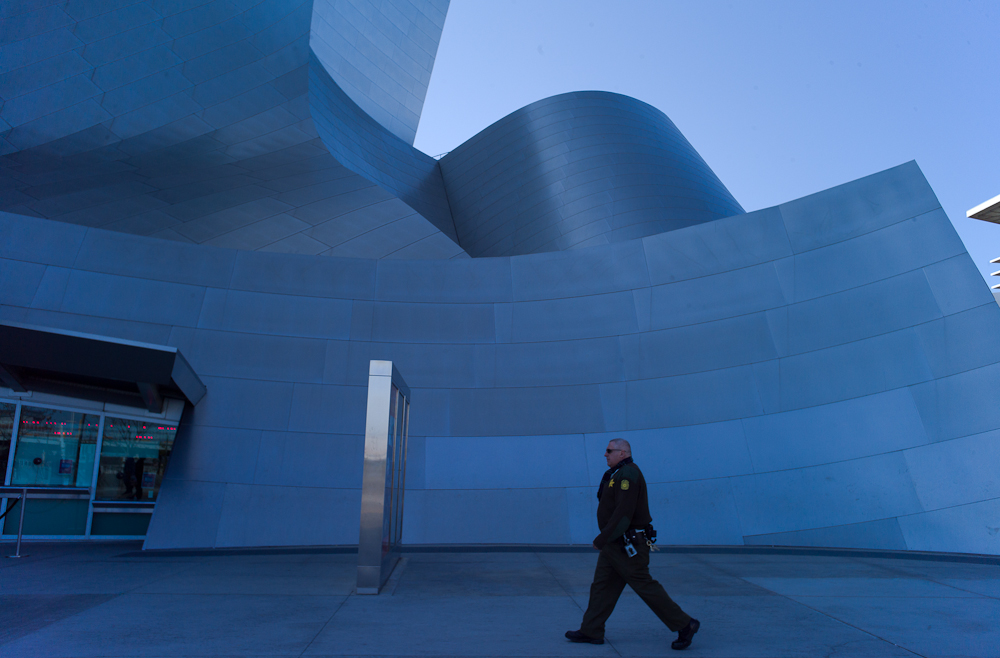 BTW, this is the Disney Hall downtown Los Angeles by Frank Gehry.

I didn’t notice any obvious edge distortion on the sides. I chose architecture to demonstrate this point.  Okay, it’s not fair with a building that already has curves. However, there is general distortion that’s noticeable on wide shots. For instance,  when you look at the officer walking towards the stainless steel signage in the middle of the picture, the sign leans toward him. But when you look at the concrete floor joint lines, they look pretty straight.

Here’s a shot with straight lined buildings, but I shot it vertically which took out some of the distortion. I also took out the cyan drift in this shot.

I never had to worry about the aperture blades being on the outside. Although, I did pay attention to it while I was cleaning the lens. It’s definitely not a ‘desert’ lens.

You’ll notice dust particles in some of my shots. I didn’t have a duster or air can with me. I only had a lens cloth. So I may not have done a good job of cleaning. But the lens does take a 19mm filter that can be screwed into the hood. This is the same filter that is used on the Leica Elmar lens. I would highly recommend a UV filter to keep the dust out.

Street photos with people and objects appears to be the lens’ favorite subjects.

I also noticed the brights blow out a touch. But I can understand considering the tiny size of the lens.

But as first impressions go, I love this little lens.  If I had a few more days with it,  I think my shots would have been geared to its obvious strengths of color, slight under exposure and ease of use. It’s definitely easier to get closer because the camera doesn’t have an obtrusive lens sticking out.

Like I said, it is a specialty lens. It’s actually quite a good ‘street photography’ lens. And the weight- pffsh, what weight? I would buy it when I stock up on lenses the next time the cash flows. You can read more about specifications at Japan Camera Hunter’s site here.

I really appreciate Bellamy letting me play with this little lens. He tells me there are still a few left from the first batch. They run for about 55,000 Yen (approx. US $663.00 with today’s exchange rate). There is also talk of doing a second run. If you’re interested, Bellamy is the man. You can contact him at  http://www.japancamerahunter.com